Over the past 25 years, I have developed people from different angles.

Initially, I started as an HR trainee, completing my undergraduate degree in Law and Philosophy, followed by an Honors Degree in Philosophy.

I started people development in the mining sector, highly volatile and multicultural, eventually assigned to international, which further exposed me to the impact of Human Resources as a discipline in general.  I moved to oil and gas, another complex environment, and slightly more challenging countries, Nigeria and Saudi Arabia, and the Middle East.

I eventually started BeyondPossible, focusing exclusively on Leadership Development.  Last year we expanded this to include Accreditation with the SETA, but something was missing.

Previously, I toyed with the idea of a formal coaching qualification – I was an internal coach to countless staff members.

I now know the difference – well, at least in my opinion. 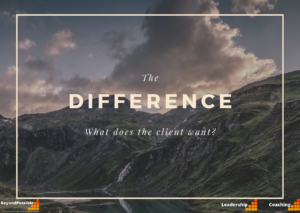 What does the client want?

Yes, there are benefits of a credentialed coach, some of them include the below:

However, not all clients want or see this as a value-adding, and herein is the dilemma.

If the items listed above are not on your list of things to check and verify when hiring a professional coach, the likelihood of you not achieving your results is slight to significantly diminished.

Note I say slightly, as some individuals who have not credentialed are natural coaches, and you will get the results – however, on a balance of probability, you do run the risk of not getting the results.

Of course, there is no guarantee that an affiliated and credentialed coach will get you the results you need; however, you are more likely to make progress with this coach and within a defined and structured environment.

The question is are the rates charged appropriate – I would argue that a coach who is not affiliated and credentialed should be at the lower end of the spectrum.

I thus decided, much like the SETA item, that specific clients within my world require this credentialing, while others value this.

I am thus thrilled to announce that I have personally completed the needed development and assessment.

I guess the answer to the question above is now – this is irrelevant if you, as the client, believe you need a credentialed coach for your reasons or believe this is not a requirement – your decision – either way, we can coach and get results – why not find out more?

Do you have a CORE Leadership Development Process?